April 2015: Eleuthera Island and Back to Florida for More Boatwork

The next stop in our tour of the Out Islands was Eluthera. Along the path from Half Moon Cay to the southern tip of Eleuthera is a cap called The Bridge. It’s well known as a good sportfishing area, so we put our lines out and followed the underwater formation. Sadly, neither of us got a hit, so we moved on to Rock Sound. The water color changed from blue to green when we turned east for Rock Sound.

We still had the lines out as we rounded Eleuthera, and suddenly one of the reels started screaming, playing line out. At first I thought that we had snagged something, but then way behind us a saw a billfish leap out of the water, and I knew we had a fish on. It took a while to bring the fish close, and then I saw that it was a sailfish, about five feet in length. We were again towing the dinghy, and once again that was a problem. As I brought the fish in close, it actually laid its head (and bill) against the side of the dinghy – we were pretty concerned that it might spear the tube. Fortunately for us, it was pretty tired, so I was able to maneuver it away from the dinghy, while Rose retied Little Blend to the port side. I brought the very tired fish to the swim platform, removed the hook, and off it went. It’s not legal to keep a billfish in The Bahamas, unless you are in a sanctioned tournament. We would not have kept this magnificent fish anyway.

known for its Ocean Hole, a blue hole located inland about a mile from the shore. It’s fairly large, with an average depth of ninety feet, and a very deep tunnel leading to the ocean. Fish have been stocked in it, and they are abundantly visible from the surface. There were some local kids jumping and swimming in the hole, but we stayed out of it. We had lunch at a local restaurant, Sammy’s, where we had traditional Bahamian food – burgers and wings… There wasn’t much else to see or do at Rock Sound, but the anchorage was nice and calm. We did walk up the main road a bit to do some light provisioning, and we visited a hardware store that had a lot of fishing gear. 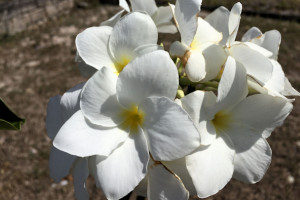 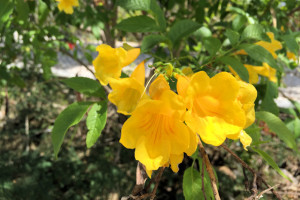 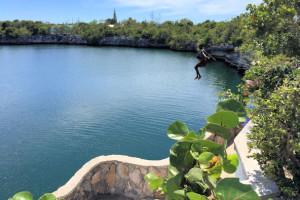 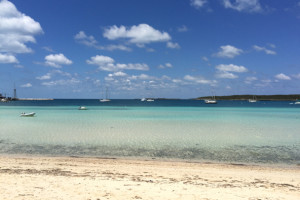 We continued moving north up the west coast of Eluthera. We decided to stop for lunch at Governor’s Harbour, about twenty-five miles north of Rock Sound. It was an easy and smooth passage, and we took the dinghy ashore to find a place for lunch. The harbor is pretty shallow and has a reputation for being rolly, so we decided to make this just a lunch and shopping stop. In the afternoon, we went a little north to Alabaster Bay, a more protected and very peaceful anchorage.

Hatchet Bay has a very interesting history. Before the 1940’s and the creation of “The Cut,” a 90-foot artificial opening created by amphibious earth-moving machines, Hatchet Bay did not exist; only a land-bound lake next to Alice Township. There are various explanations as to why the cut was created, but the result is a large, very well protected harbor. The entrance is between fifty and ninety feet wide, depending upon who you believe. It was only visible once we were directly in front of it, and Rosé was quite nervous going through it, but we managed easily. That being said, it did indeed look very narrow as we passed through.

As an anchorage, the reviews were mixed. The primary danger is debris on the bottom that can foul an anchor. Globetrotter proceeded towards the town dock and took a mooring, but we elected to trust our anchor. The bottom profile varies widely, and it was hard to find a flat spot with reasonable depth that wasn’t too close to the many local boats, but we managed. We went ashore with Kevin and Donna, but we found with this being Good Friday, the town was buttoned up very tightly. We managed to find one very local “restaurant” that was serving fish lunches, and beer in the secret back room. This might have been an interesting place if the town had been open. 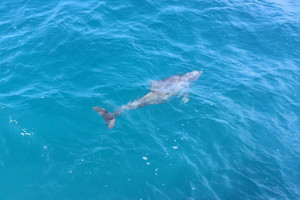 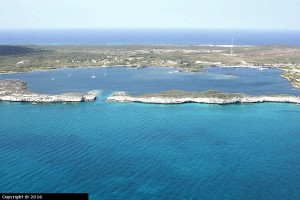 Welcome, but don’t expect much on Good Friday              The better dinghy dock and the anchorage

Our last stop in central Eleuthera was the Glass Window, which has a magnificent panoramic view. It is one of the few places on earth where you can compare the rich blue waters of the Atlantic Ocean on one side of the road and the calm turquoise-green waters of the Exuma Sound (Caribbean Sea) on the other side, separated by a strip of rock just 30 feet wide. We anchored a little to the southwest of the bridge, and took the dinghies to shore. We hiked up the hill and walked over the bridge – it really was stunning. The difference in the ocean color on the east side and the bank color on the west side is remarkable. 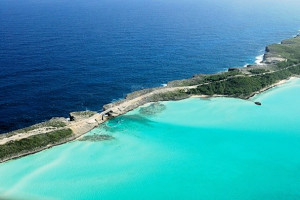 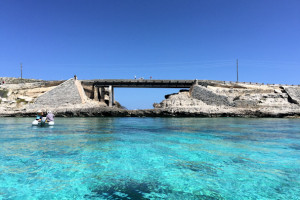 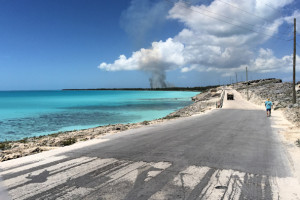 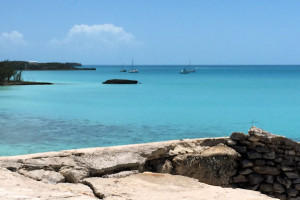 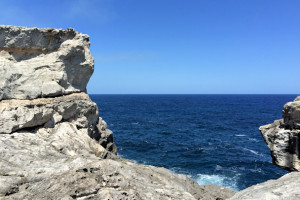 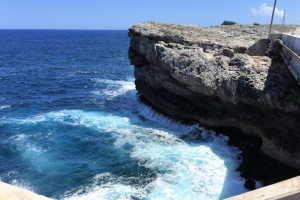 After checking out the Glass Window, we took the dinghy around for a local tour, and stopped at the beach for some drinks. It was just another beautiful day in The Bahamas. 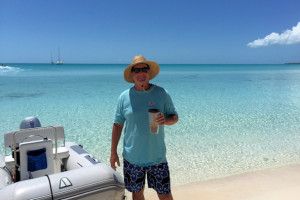 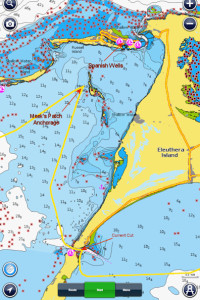 Leaving the Glass Window, we headed west towards Current Cut, which would allow us to go to Spanish Wells on the south side of North Eleuthera. Current Cut is one of the more treacherous cuts in The Bahamas, with extreme tidal currents often exceeding six or seven knots. It’s not always easy to figure out the actual tidal state in the cuts, as the charts show tides on both sides of the cays, with some sizeable differences. It’s critical to go through Current Cut as close to actual slack tide as possible. After doing some research, I found a sailor’s blog where the problem had been solved. Slack tide through the cut happens about an hour and a half after slack tide at Nassau. Armed with this information, we planned to go through the cut between 10:00 and 10:30. Globetrotter bravely blazed the trail. Getting to the cut requires heading south of it, then making a 90° turn, proceeding very close to the shore before entering the cut. Once we got inside, we estimated the current at one knot, so no problem. Except that some idiot had placed a couple of fish trips in the middle of the narrow channel… 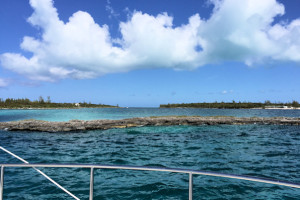 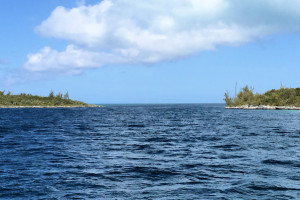 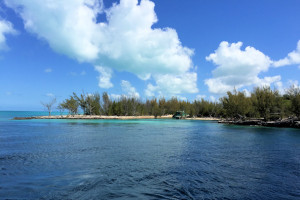 Anyway, once we cleared the cut we proceeded towards Spanish Wells, and we decided to anchor off of a small island called Meek’s Patch. The depth in the channel near Spanish Wells is shallow, and the moorings are very close together. We were comfortable anchoring, as we would have protection from the east. It was Easter Sunday, and there were a number of strange local craft having a raft-up party on the small island.

On Monday morning, we were greeted by some stormy weather, with heavy cloud cover and gusty winds. We were surprised to see that the raft-up was still going on the island, since it was now Monday. We talked with Kevin and Donna, and we collectively decided to take the dinghies to Spanish Wells for lunch and shopping. Once we left the lee of Meek’s Patch, we were hit with some not-insignificant waves, so we decided to head straight across to Russell Island, where we thought we might get some protection. That didn’t work out so well, and we could not keep the boat on plane without getting soaked. The three-mile trip took about forty minutes. Once we arrived at Spanish Wells, we found out that the town was buttoned up tight – apparently Bahamas business close for four days around Easter. We walked around for quite a while until we found the only open restaurant in town. We also noted the lack of bars – later we would find out that Spanish Wells, like many communities in The Abaco’s and Out Islands, is dry – who knew? The restaurant was a big diner that had some strange food, but we managed. After lunch, we returned to the boat (a drier ride this time), and set out to haul Little Blend up to the boat deck in gusty weather. It’s almost impossible to retrieve the dinghy when the boat is rolling. Under stable conditions, wind can make the job tough, as it blows the bow of the dinghy around while we are hauling it up. We managed to guess when the gusts were down by reading the water, and we hauled it up without incident. We said goodbye to Kevin and Donna. They would be staying around Spanish Wells for a few days before heading to The Abaco’s, but we did expect to see them in North Palm Beach later. 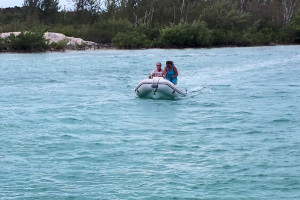 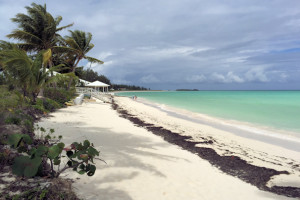 We decided to make one more stop in our journey back to Florida. It was a little over fifty-five miles to the Berry Islands, and looking at the charts, we decided to anchor off the west side of Soldier Cay. It was an easy passage for the most part, although the wind and seas picked up in the afternoon. Soldier Cay was one of the northernmost cays in the Berry’s that had enough depth for safe anchoring – most of the area west of the cays is very shallow. Once we passed through the cut, we anchored, but found that our first choice was too rolly, so we relocated a little to the north, which was a better choice.

Our final voyage out of The Bahamas took us past Little and Great Stirrup Cays, owned by Royal Caribbean and Norwegian Cruise lines, respectively. That day there were four ships docked, and the beaches were absolutely packed with cruise ship riff-raff. It was a very easy cruise, and we had to back way off of the engine rpm’s early in the evening when the Gulfstream caught us. We wanted to arrive at the Lake Worth Inlet at slack tide at 8:30 the following morning. For some time we were running at just 1000 rpm’s and still making six knots!

As we approached the inlet, the water was pretty rough, and we watched some boats getting tossed around in the inlet, but when we entered just a half an hour later, it was smooth sailing. We worked our way up the ICW to our marina, and we docked in a slip that was at the far end of the marina, making for a very long walk to the bathroom – oh well. It was good to be back, and we were looking forward to completing the projects.