We wanted to replace the original Todd helm chairs. Island Magic had the basic Todd ladderback seats with some very dirty and warn cushions. Rose hated them, ’nuff said. We spent a long time searching for some outdoor helm chairs that looked nice, would fit in the small space, and wouldn’t place yet another hole in our budget. There’s no real showroom for these seats, so you have to make your best guess. After a long time, we finally settled on a few possibilities. We ended up taking a chance on some seats from Veada. This company is based out of Indiana, and they make their own seats. We guessed that most of their business comes from RV’s and pontoon boats, but they did have a few helm seats that intrigued us. We ended up ordering the Reclining 1000 Helm Seat – it fit into our space, bolted on to the existing hardware, and allowed us to choose custom colors. And the best part was, both seats cost less than a boat unit, with free shipping! The build cycle was 8 to 10 weeks, which would cut very close to o 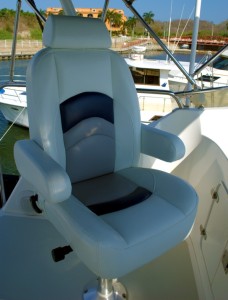 ur departure time. We figured if there was a delay, we could have them shipped to Nordhavn in Dana Point, where we could pick them up on our way down south.

They actually finished about a week early, and one day in late September, they arrived at my office. The guy with the freight truck spoke a language I had never heard of before, but I worked out that he wanted me to come down to the truck to pick them up. They were in really big boxes, sitting on pallets. The boxes said “no lift gate required”, which the driver too very seriously. Instead of doing the sensible thing (lowering the pallets using the lift gate”, he insisted that we had to manually lower the pallets and boxes. I believe that the pallets weighed at least three times more than the seats! After struggling to unload the pallets, leaving them on the loading dock, the driver ju 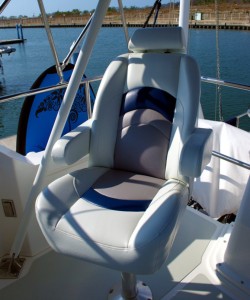 st left. I was able to place the boxes on a hand truck and take them into the office. I opened one up, and verified that they were indeed what we ordered. By taking them out of the boxes, I was able to squeeze one into the front seat of my Acura CL. Once home, Rose took one to get a cover made for them.

We love these seats! They look great the build quality is good, the colors match the Tropical Blend, and who doesn’t love a reclining helm seat? Now, if we only had a big flying bridge for them… and you can order these now from Veada, at just $479. Check ’em out!