Back when we were in Mazatlan, we read about the monarch butterfly preserves in Michoacan. These are the winter homes for millions of monarch butterflies that migrate from the United States and Canada. Sadly, their numbers are in decline, due to loss of habitat in the north. Mexico has taken steps to ensure that the butterflies have a safe winter home, preserving the natural forests. But the caterpillars only eat milkweed, which has been displaced in the United States and Canada in farming areas. We understand that the USA is restoring milkweed, but this year had the lowest butterfly numbers on record. Still, we believed it would be a worthwhile trip.

We planned to take a highway bus the the capital of Michoacan, Morelia. We had been told that Morelia is a very beautiful city, despite being the capital of Michoacan, where many of the cartel wars are happening. We would spend a night in the historic district, and take a guided tour to El Rosario the next morning, returning to Ixtapa by bus that night. The morning we were to leave I noticed that we had lost all water pressure. The pump was supposedly running, but there was no output. Well, that was a fine kettle of fish! Our friends had just brought us a new spare – I had not seen Flojet pumps anywhere in Mexico. We simply turned the breaker off, left lots of food and water for Quincy, and departed for the bus station. The bus was very comfortable, with air conditioning that was actually too cold. We left at 10:00am, arriving in Morelia at 2:00pm. Morelia is in the mountains at 6,400 feet, so the nights are very cool. In addition, the butterfly preserve at El Rosario is even higher at about 10,000 feet. We were looking forward to cooling off…

We stayed at the Hotel Real Madero in the historical district. I had the reservation paperwork with me, but the first taxi driver we met had no clue where it was, despite having the address right in front of him. He had a book of hotels, and kept insisting that there was a different Hotel Real Madero, and that it wasn’t in the historical district. I offered my phone to him to call them, but to no avail. We wasted a good five minutes trying to convince him where we were going, and then we gave up. The second taxi drive immediately knew where to go. Once we got to the district, close to the hotel, we ground to a halt. There were a mass of people camping in the street we needed to use to get to our hotel. The driver explained that it was just a couple of blocks away, but that we would have to walk. The area looked like the “occupy” protests in the USA. There were lots of tents, food booths, and an almost carnival atmosphere. 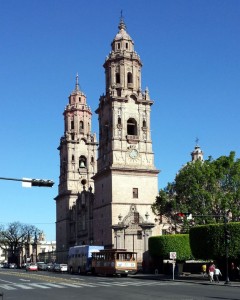 We found our hotel and entered the lobby. Both of the agents there spoke English very well. After checking in, we asked about a tour to El Rosario. They made a phone call, and we were booked to leave at 6:00am the following morning. Our room was on the second floor, and the bedroom was in a loft. It was a very cool room, both literally and figuratively. We dropped off our bags and went out to see Morelia. The architecture in the historical district is French provincial – you would swear that you were in Paris. There are lots of al fresco restaurants and bakeries. This area has many universities, so it was crawling with college kids. There was a beautiful cathedral just outside of our hotel, and we walked through the neighborhood. 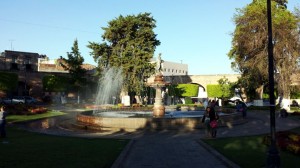 At the eastern end of the district, there was a square with a fountain and an aqueduct. We found Morelia to be a very charming and beautiful city, and we wished that we had more time to spend in it. We had a nice dinner in our hotel, and retired early since we had to leave before dawn.

The next morning our guide picked us up for the long drive to El Rosario, which would take about three and a half hours. We asked him about the protesting campers. He explained that they were teachers. The Michoacan government was trying to upgrade their education system. At present, it seemed like anyone could be a teacher. The government was now requiring teachers to either have formal education qualifying them, or else requiring a teaching certificate. They were allowing present teachers to get educated for the certificate while still teaching, but the lay teachers were protesting this by camping out in the main street – go figure.

Our guide was very knowledgeable about the area, as well as the butterflies, and he drove us to the preserve in maze-like fashion. If you have ever driven in Mexico, you know that signs are a rarity. We went through a lot of villages with twists and turns, over roads that were a mixture of good and evil. We finally arrived at El Rosario at 9:30, and bought some cokes and water for the hike. We knew that it was quite a ways to get to the butterflies – some people choose to rent horses for the trek, but we decided to walk. Our guide told us there were 600+ stairs to climb. You pay a nominal entrance fee (I think it was ten pesos), and a guide / ranger from the preserve goes with you. The senorita that was with us was in much better shape than us. Being acclimated to sea level, and a relatively sedentary life, we weren’t in the best of shape. I shed my jacket after about one hundred stairs. The stairs are cut into the dirt side of the mountain, so they aren’t even. But we took advantage of the many benches that were set up for resting.
We finally got to the top of the stairs, and then there was a undulating trail. It felt marvelous to go downhill a bit. I was sweating, sick, and delirious. After some time, we went cross-country, and then descended into a pine grove – and there they were! 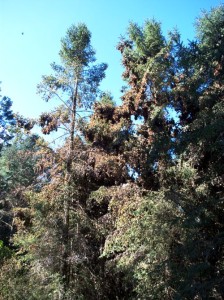 The grove was eerily quiet, and we were the first visitors of the day. At first, you don’t even realize there are millions of butterflies around you in the trees. It was still cold, and they were just starting to stir. Our guide told us that they clump together for warmth at night, and as the sun warms their wings, they start to flutter about. You know, a butterfly fluttering by! We aren’t religious people, but being there was a spiritual experience. You are awed that these delicate creatures are able to undertake such a huge migration. We felt very humbled that we are migrating with twenty-seven tons on boat underneath us, with all of the creature comforts of home. You realize that these butterflies have traveled over a thousand miles to get here, going on nothing more than instinct. 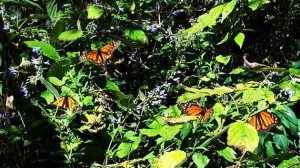 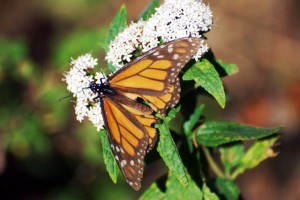 As the sun started to warm them up, the monarchs started to fly. The forest was full of gossamer wings with brilliant colors. Every now and then, one of them would light on us, pausing without any cares. We were told that before they start the migration north, they mate. The males won’t make the migration, and they die on the ground. The females will fly north until they find a milkweed patch, lay their eggs and then die. The caterpillars emerge, gorge themselves on milkweed, and then undergo an incredible metamorphosis into the next generation of monarchs, and then continue the northbound journey. It;s truly amazing, and we just marveled being there. Like I said, it was a spiritual experience. Let these pictures express some of the wonders we saw that day. 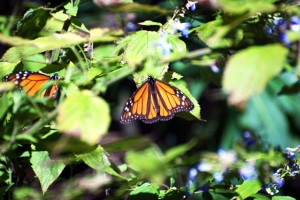 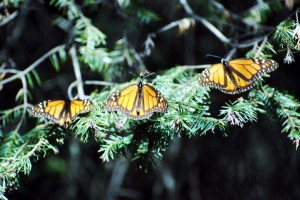 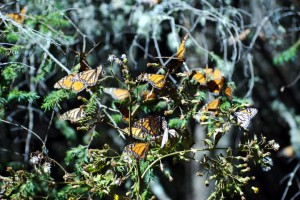 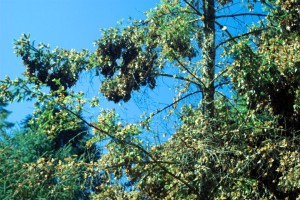 We stayed in the grove for about an hour. A few other groups joined us 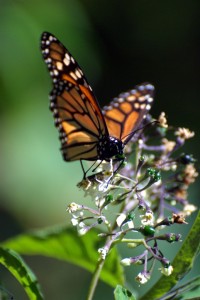 after some time. When we left, we saw a huge group of people on horseback in the clearing near the grove – we left just in time. The trip down was much, much easier on us, and we had a local lunch at a shack when we returned.

We arrived back at the Morelia bus station just in time to barely miss the 3:00 Parhikuni bus back to Ixtapa. So, we booked tickets on the Autovias bus leaving at 4:30. This was the same company we used getting to Morelia, and this bus was even colder than the one we had the previous day. I think there were only tow or three passengers besides ourselves. The fares aren’t cheap, at $485 pesos, but it’s hard to imagine that they could make money with the handful of passengers on this route. It’s a non-stop bus, but there are many slow-downs for security checkpoints and turns. Once we got back to Ixtapa, we stopped for a pizza, and walked back to the marina.